As part of the ongoing Downtown Safety and Circulation Improvements Project, a portion of Mainstreet in downtown Parker between Pine Drive and Victorian Drive (east) will be subject to a temporary lane shift beginning Monday, June 20.

The Mainstreet westbound lane in this area will shift to the south side of the median, resulting in a temporary two-way, non-divided roadway while construction occurs on the north side of the median. In addition to pavement repairs, a right-turn lane will be constructed to assist with easing flow for westbound traffic at the Mainstreet/Victorian Drive (east) intersection.

The Downtown Safety and Circulation Improvements Project began construction in Fall 2021 and has added a number of pedestrian safety and circulation improvements to the downtown area, including a new traffic light at the Mainstreet/Victorian Drive (west) intersection, which became operational in May. 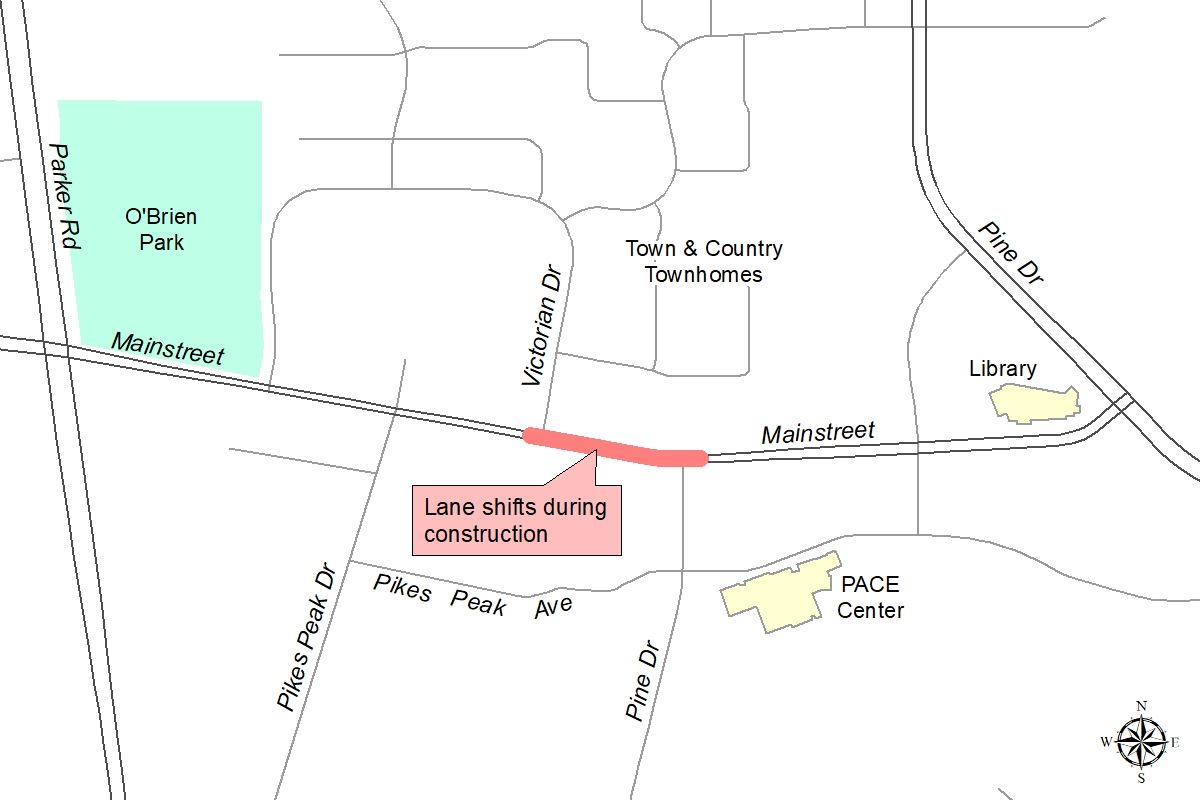 Construction of a new traffic signal in downtown Parker at the intersection of Mainstreet and Victorian Drive (west), in the area of O’Brien Park, is nearing completion. The traffic signal is expected to be fully operational by Friday, May 27.

Drivers and pedestrians should be aware of the following details for the upcoming week:

Construction work related to the Downtown Safety and Circulation Improvements Project may result in occasional minor traffic delays in the downtown area early this spring.

Due to pavement repairs planned for Mainstreet between Victorian Drive (along O'Brien Park) and S. Pine Drive (along the PACE Center), motorists may experience lane closures and/or minor detours. While thru traffic will still be allowed through the downtown area, motorists may want to seek out alternate routes to avoid any delays.

This project is scheduled to continue into Summer 2022 and will be dependent on weather and temperature conditions.

An anticipated safety and circulation improvements project will begin construction in downtown Parker in Fall 2021.

This project will add pedestrian safety and circulation improvements on Victorian Drive and Mainstreet, as well as a new traffic signal at the Mainstreet/Victorian Drive (west) intersection. For more details about this project, see the diagram displayed below.

The project is scheduled to begin construction in October 2021 and continue into June 2022 (weather and temperature dependent).

For more information about this project, please call the Town of Parker's Engineering and Public Works Department at 303.840.9546.